From WGC to the City of London Guildhall 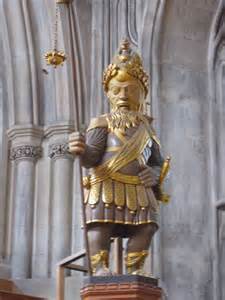 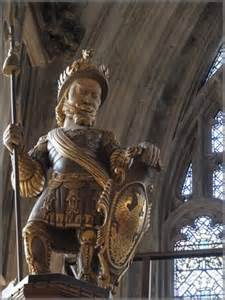 A few months ago during a visit to the Guildhall in the City of London I remarked to the person on duty that I remembered seeing the statues of the giants Gog and Magog being carved in the early 1950s.

The current statues are the third;  the first pair perished during the Great Fire of 1666, the second were blitzed in 1940.  I’ll leave you to do your own research into the origins of Gog/Magog and their connection to the City of London.  Those origins are mysterious and tenuous!  Suffice to say here that it was common for people to regard the original inhabitants of their lands as giants.

My friend Derek Green’s father worked in the building on the east side of Broadwater Road, where these 9ft 3in high giants were being carved by Welwyn Garden sculptor, David Evans.   I was lucky enough to be invited to go in and see them.   It is just the sheer size of them that over 60 years later I recall.  I was probably 8 years old.

I cannot now remember the name of the firm in whose premises they were being formed.  I’m sure somebody will know.  There is probably a Welwyn Times report somewhere in the archives that will tell us.

If you haven’t seen them they are well worth a visit;  the rest of the Guildhall and its contents aren’t bad either!