'men, women and young people skilled in any of the crafts' 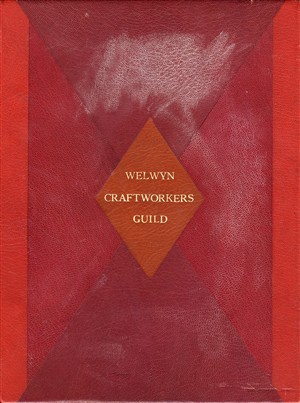 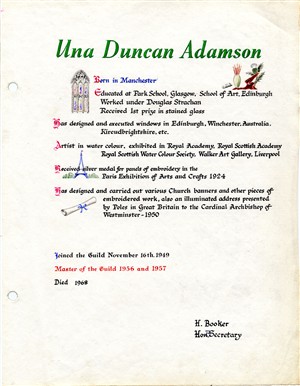 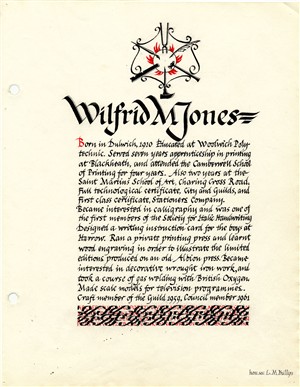 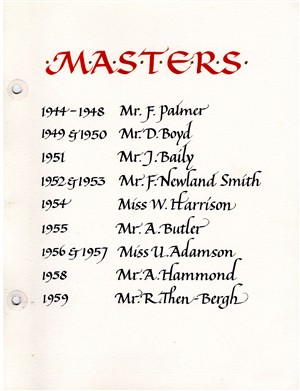 Masters of the Welwyn Guild
Hertfordshire Archives and Local Studies

One of the pleasures of working alongside the Hertfordshire Archive is that from time to time I’m shown lovely documents relating to the arts in Hertfordshire. These are usually about organisations or people I wasn’t aware of, but then open up a whole new view on arts activity in the county. One such document that came my way recently was the record of the Welwyn Craftworkers Guild with handwritten and decorated pages about each member.

According to the Welwyn Garden Citizen’s Handbook of 1946 the Guild was founded in 1945 ‘to band together for co-operative effort those skilled in crafts, to foster the traditions, and promote public appreciation, of good craftsmanship, and to work in association with kindred bodies for cultural ends’ (this was in the era before bullet points). Membership was open to ‘men, women and young people skilled in any of the crafts’. People interested, but not skilled could become lay members but they couldn’t vote. Membership cost the grand sum of five shillings a year.

The craftsmen and women listed were skilled at carpentry, stained glass, calligraphy, weaving, silversmithing and metalwork, book binding and pottery. The list shows quite a strong bias to carpentry and wood work. Many had had distinguished careers, often connected to Welwyn Garden City, before retirement. However, except in a handful of examples, it is difficult to track down more information about them or to see examples of their work.

Tantalising glimpses of interesting careers are given. The following two give a flavour of the Guild members.

Una Duncan Adamson was born in Manchester and educated at Park School Glasgow. She attended Edinburgh School of Art, worked under Douglas Strachan and received 1st prize in stained glass. She designed and executed windows in Edinburgh, Winchester, Australia and Kircudbrightshire amongst others. She also worked in watercolour and exhibited at the Royal Academy, Royal Scottish Water Colour Society and the Walker Gallery in Liverpool. Her embroidered panels won a silver medal in the Paris Exhibition of Arts and Crafts in 1924. She lived at 100 Handside Lane and died in 1968.

Wilfred Jones attended Camberwell School of Printing and St Martins School of Art. He was one of the first members of the Society for Italic Handwriting and designed a writing instruction card for the ‘boys of Harrow’. He also ran a private printing press and learnt wood engraving to illustrate the limited editions. Unfortunately I can’t find the name of his Press so if anyone has more information I’d love to know. Finally he made scale models for television programmes.   The Guild lasted until the 1980’s. A full list of the members and their crafts are listed on a separate page of the website.