Tackling the mud in the early days of the town 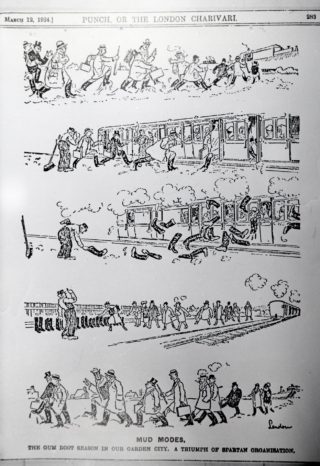 Roads were built very slowly in the early days of the town due to limited financial resources, and mud was a major problem, especially through the winter months.

“Punch” magazine lampooned the situation in 1924 with a full page cartoon showing city gents racing to catch their train at the station halt through the mud and mire.
On boarding the train it then showed them throwing their wellington boots out of the window and being collected by the station porter who placed them in neat rows. On their return they changed back and waded home. The cartoon was called “Mud Larks in our Garden City”.

Mrs Ridgewell, of Knella Road, told me that on one wet and windy day she had sent her son to the branch stores at the end of Knella Road (still a convenience store). He returned with the shopping but minus one wellington boot. The other, he said, has disappeared in the mud. When the insurance man called later, Mrs Ridgewell told him the story of the disappearing wellington. “That’s nothing,” he said. “I was walking down Handside Lane this morning when I came across a bowler hat lying in the road. When I bent down to pick it up there was a man’s head underneath!”