You are here: Home>Topics>Transport>Once a busy line

Once a busy line 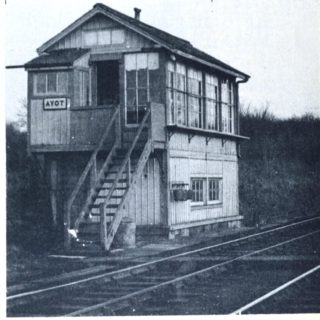 "A 100 year old signal box at Ayot on the line between Welwyn Garden City and Dunstable (The Bluebell Line) which is to close soon."
Welwyn Times and Hatfield Herold

This signal box pictue appeared in the Welwyn Times and Hatfield Herald on 5 february 1965 page 43 with the heading Closing soon.

The following article appeared with it:

“The Luton branch line is to close and with it the old wooden signal box, reputed to be around a hundred years old.

Nowadays with normal running, a total of 32 trains, passenger and goods pass along the line, but at one time the track was a very busy line with sidings at Ayot, a bustling station, and distribution centre.

On July 26, 1948, the station, an all wooden building, was totally destroyed by fire,people coming from miles around to witness the scene.

The fire is thought to have been started by a spark from an engine, as it was first noticed shortly after a train had left the station. Five fire brigades attended, and despite their efforts the building could not be saved.

All that remains now is an ugly brick built lavatory, a foot crossing points and one or two LNER. “Beware the Trains” signs and a lamp post.

Curiously enough the day the closure was announced, a railways inspector came to examine the lamp, saying that someone had asked to buy it.

In the signal box there is an impressive array of levers, but many are not in use. The box employs one regular signalman, operates four sets of points, and ten sets of signals.

Apart from the commuter traffic, there is a regular stream of coal trucks, and also London rubbish, coming out to the tip just outside Wheathampstead.”

The following article appeared in the Welwyn Times on 30 July 1948 page 1:

“The “wooden box” railway station at Ayot was gutted by fire on Monday morning.

During the two-hour blaze, smoke and flames enveloped the station and the small of burning creosote drifted for miles.

Firemen struggled across fields with hydrants but the all-wooden structure defeated them; only cinders and a chimney stack remain of the up-platform with its waiting room.

Spectators helped the firemen handle a pump and hoses over the burning track and across the fields to a nearby pond.

The down-platform, waiting room and booking office were severely damaged.

Spotted by the porter

Flames spread along the sleepers and the track curled and buckled in the heat. An emergency gang fron Hitchin found the line three feet out of true. They restored service during the afternoon.

Firemen from WGC, Hatfield, Welwyn, Stevenage, Harpenden and St Albans were there. The Welwyn Brigade was the first to arrive.

A porter spotted the fire at 10.33am, just after a passenger train had left the station. With Signalman George Hercock, of Meadway, WGC, he fought the flames with extinguishers. When the fire got out of hand they called the brigades and began to salvage stores.

Twelve minutes after the fire was discovered, Mrs Bantin, who lives at the station house, received a telephone call from her husband, a clerk at Liverpool Street, asking if the house was all right.