You are here: Home>Topics>Transport>Shocking train smash at Welwyn Garden City

A night of terror 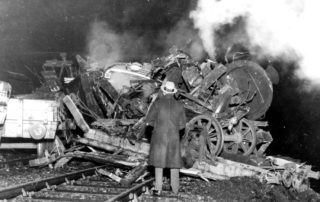 The wreckage as seen that night
Hertfordshire Archives and Local Studies 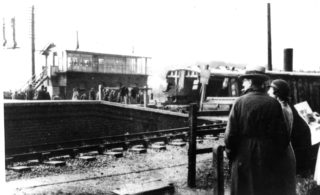 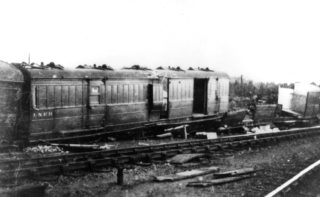 Some of the carriages
Hertfordshire Archives and Local Studies 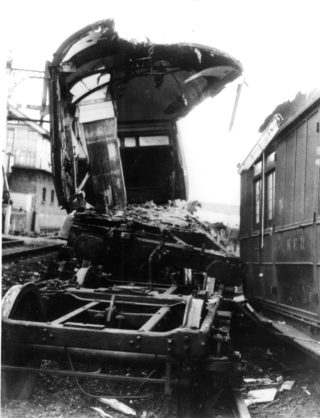 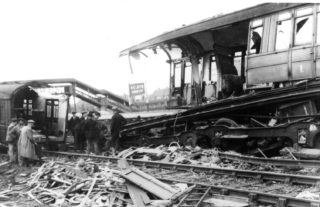 The extent of the damage
Hertfordshire Archives and Local Studies 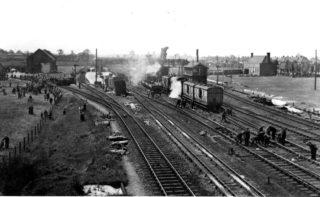 The clearing up operation. The station building can be seen on the right, and the huge crane used in the middle.
Hertfordshire Archives and Local Studies

At 11.28pm on Saturday June 15th 1935 there was a terrible train crash at Welwyn Garden City, just past the signalman’s box, near the station

14 people were killed and at least 29 were injured.

The first train was the 10.45 express from Kings Cross carrying passengers to Newcastle in two portions. The first portion was not involved in the accident.

It was followed at 10.53 by the second portion conveying passengers to Newcastle. This was then followed by the parcels train which left Kings Cross at 10.58 carrying passengers and parcels.

According to Mr Hodgson, the stationmaster, the accident occurred at 11.28.

At 11.29 a taxi driver waiting outside the station, gave an emergancy call by telephone to the local exchange asking them to call all available ambulances. The ambulances were at work from 11.45 until 12.30 when all the injured had been seen. The injured were taken to Hertford and Welwyn hospitals and some of the walking wounded were taken to nearby houses.

Mr H N Gresley, chief Mechanical Engineer of the L.N.E.R gave a description of the formation of the two trains involved.

The first train consisted of 11 coaches and weighed 350 tons. The weight of the engine and tender was 112 tons so the total weight of the train was 462 tons.

The coaches of the first train were entirely modern stock, with heavy steel underframes and teak bodies. The whole of the coaches were fitted with Buckeye couplers and Pullman vestibules.

The 60ft guard’s van of the first train was crushed up into a very small space after the impact, and the body shattered to peices. Mr James M McIntosh, aged 50, of 14 Charles Street Newcastle-upon-Tyne was the guard of the Newcastle express and was killed, along with his dog.

The drivers of both trains survived the incident, Mr R E Morris aged 46 was in the first train, he had entered the service of the L.N.E.R in 1906 and had been an engine driver since 1922.

The driver of the second train was a Charles Barnes, he left Kings Cross station eight minutes late as it had to follow the passenger train, but he said at the inquest that he had not expected to make up time.

The engine of the second train carried the frame of the last coach of the first train 140 yards from the point of collision. The remarkable part about this last coach was that notwithstanding the tremendous shock of the impact the Buckeye couples were so strong that they held the coach from falling over, although the bogies and wheels had gone from under it.

In that coach nobody was killed or seriously injured, all the passengers were able to walk back to Welwyn Garden City station. Beyond the last two carriages no damage was done to the rest of the train.

There was no telescoping of the train whatever, which was entirely due to the heavy steel frames and strong Buckeye couplers. If it had not been for these, considerably more damage would have been done, and much more serious injuries would have been sustained.

The second train was described as being 394 tons and differed from the first in that it was not entirely composed of modern rolling stock, only the first three carriages were of modern stock. It was in this train that the most serious injuries occurred.

Col. A H L Mount, Ministry of Transport Inspector held an inquiry into the disaster at the ballroom of the Cherry Tree Restaurant in Welwyn Garden City on Thursday 20th June 1935.

A special train from Kings Cross brought railway and government officials to the scene of the crash shortly before the inquiry opened.

The officials inspected the line and the damaged coaches, which had been removed to Hatfield and Welwyn North stations. The inquiry was due to start at 10am but the inspector was occupied for two and a half hours inspecting the line and the rolling stock so the preceedings did not get underway until 12.30.

Colonel Mount express deep sympathy to the relatives of the dead and seriously injured and explained that the inquiry was being held primarily from a techinical aspect in order that they may determine the cause of the accident. He also advised that some of the evidence may be heard in private, and members of the press and public were asked to leave at certain points in the hearing.

After the formal identification of the fourteen dead and statemants from witnesses and railway workers the inquiry was adjourned until Friday 5th July.

A memorial service was held at St Francis Church on Wednesday 19th June and was conducted by Rev. J P P Gorton. During the service the hymns ‘Abide with me’, ‘Jesu, Lover of my soul’ and ‘Loving Shepherd of Thy Sheep’ were sung but some members of the congregation could not contain their sorrow during the singing or when the names of the dead were read out.

The victims of the crash were:

James M McIntosh, 50, of 14 Charles Street Newcastle-upon-Tyne, the guard of the Newcastle Express.

David Bell, 35, of 54 Thistlecroft Road, Horsham, Surrey, and his wife.

Mrs Betty Ashford, mother of Brenda Doris Ashford and daughter of Mrs Annie Appleton survived the crash but had a broken arm and severe head injuries.

Another touching story was that of Mrs Margaret Gales of Sturgeon’s Way Hitchin, She was travelling on the wrecked train with her four year old daughter, she sustained injuries to her back and right leg and was taken to Hertford County Hospital, the child however was missing.

Mr Gales was waiting at Hitchin station to meet his family, when he heard the news of the tragedy he went to the hospital to find his wife, the child was still missing.

The next day it was discovered that the child was quite safe and being taken care of in a house in Welwyn Garden City. Someone who had rescued the child had put a note in the mother’s hat stating that she was safe, this then led to her recovery.

The inquiry of Friday 5th July 1935 was held at the Peartree Clubroom, Welwyn Garden City. Mr F R Shillitoe was the coroner and he sat with the nine jurers.

In front of the jury and the coroner was a plan of the track where the accident happened, and on a long table working models of the signalling system, including the instrument used in the boxes, and miniture signal posts had been erected.

Mr Barrington Ward, superintendent of the Western Section of the L.N.E.R. explained the working of the signals showing how trains are passed from one section to another by a code of bells. By this method, Mr Barrington Ward said there could be only one train in a section at a time, unless there was a failure of the human kind.

After hearing the evidence, which last over two hours, the coroner Mr F R Shillitoe, addressed the jury. He said that it was for them to decide whether the disaster was due to any persons neglect, or whether it was an error or forgetfulness. If they were of the opinion that there was neglect amounting to culpable negligence, the person responsible for such a breach would be guilty of manslaughter. If they thought it was due to a lapse of memory or an error of judgement, and there was no gross or culpable negligence, their verdict should be accidental death.

The jury were out for 35 minutes and returned with a verdict of “accidental death” and added that the accident was due to temporary lapse of memory and error of judgement on the part of the Welwyn Garden City Signalman.

More information can be found about the crash in the Hertfordshire Mercury. The crash details and a listing of the wounded and where they were taken can be found on page 13 of the 21 June 1935 issue.