You are here: Home>Topics>Transport>WGC Railway Station 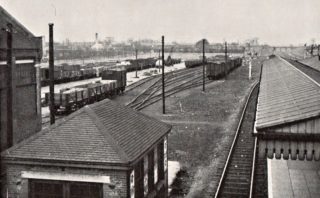 Hello all. I started my railway career in September 1966, by reporting to George Evans, who was then Station Manager at WGC. I saw his clerk first, John Shipsey, and was later taken in a Ford Anglia to Welwyn North, where I trained in the booking office, but also got to visit the signal box. After a month or two I was sent to the old East Side ticket office on the footbridge at the Garden City station, where I sold tickets in the morning rush peak from what was really nothing more than a tin hut sticking out off the bridge. For the rest of my shift, I worked in the parcels office. Never forgotten those days. Here’s a photo of the goods yard after it was extended towards the end of the war. It was still quite busy in the 60s and had an evening service to Whitemoor, Cambs as well was receiving traffic for Welgar, Norton Abrasives and Lincoln Electric, amongst others.