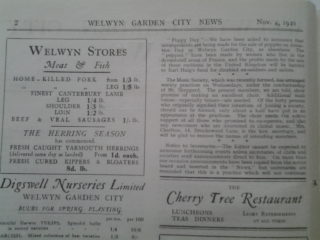 The Flanders Field poem by Lt Col John McCrae inspired an American academic named Moina Michael to design and make handmade silk poppies. These poppies were then brought to England by a French lady, Anna Guerin.

The (Royal) British Legion formed in 1921 and immediately ordered 9 million of the poppies to sell on 11th November 1921. The poppies sold out almost immediately. It was the first ever ‘Poppy Appeal’ raising over £106,000.

The following article appeared in the Welwyn Garden City News on November 4, 1921…….

“Poppy Day” – We have been asked to announce that arrangements are being made for the sale of poppies on Armistice Day in Welwyn Garden City, as elsewhere. The “poppies” have been made by women who live in the devastated areas of France, and the profits made by the sale of these emblems in the United Kingdom will be handed to Earl Haig’s fund for disabled ex-soldiers and sailors.