You are here: Home>Topics>Wartime>WWII>Paper Rationing 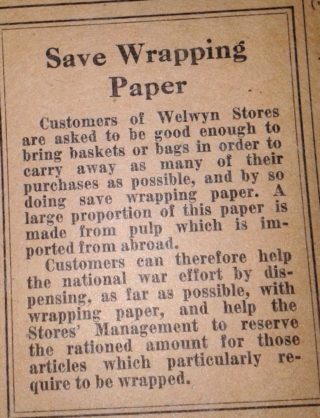 Rationing was introduced temporarily by the British government several times during the 20th century, during and immediately after a war.

At the start of the Second World War in 1939 the United Kingdom imported 20 million long tons (20 Mt) of food per year (70%), including more than 50% of its meat, 70% of its cheese and sugar, nearly 80% of fruits and about 70% of cereals and fats. The civilian population was about 50 million. It was one of the principal strategies of the Germans to attack shipping bound for Britain restricting British industry and potentially starving the nation into submission.

We all know about food, petrol and clothing rationing during and after World War Two to help cope with shotages in supplies, which came from abroad.

By the autumn of 1939, there was an increasing sense of urgency that Norway had to prepare, not only to protect its neutrality, but indeed to fight for its freedom and independence.

Norway managed to negotiate favourable trade treaties both with the United Kingdom and Germany under these conditions, but it became increasingly clear that both countries had a strategic interest in denying the other access to Norway.

On 9 April 1940 Germany invaded Norway, by occupying Norway, Hitler had ensured the protection of Germany’s supply of iron ore from Sweden and had obtained naval and air bases with which to strike at Britain.

Wood pulp was bought into Britian from Norway and once Germany had taken occupation, this supply became very short.

Paper was rationed from September 1939 and newspapers were limitedto the amount they could use.

The new Order issused by the Ministry of Supply on April 13, reducing the quantity of paper supplied by paper mills to customers during March, April and May from sixty per cent to thirty per cent of the amount supplied and manufactured in the same period last year, except under licence, will add greatly to the difficulties of those responsible for the production of newspapers in wartime. Licences already issued to supply or convert paper are reduced by fifty per cent.

The new Control of Paper Order has been brought into being as a result of the German invation of Norway, and is due to the fact that importation of newprint and the wood pulp from which it is largely manufactured, has been stopped for the present. Newspapers, therefore, are called upon to exercise the strictest possible economy in the use of paper.

In common with all other newspapers, daily, evening, and weekly, the Welwyn Times has a duty to perform in this direction, and drastic reductions in the number of pages per issue appear inevitable. It is our duty, therefore, to inform our readers that reports must be definitely limited in length.

In spite of these economies, borne of necessity, we hope to continue to present, faily and accurately, items of local news. If these appear in summarized form, as seems likely, and if items of minor importance are eliminated, or if any other changes have to be made as a result of the Order, we would ask the indulgence of our readers.

Newspapers were not the only things to be affected by a shotage of paper, the following article also appeard in the Welwyn Times

Customers of Welwyn Stores are asked to be good enough to bring baskets or bags in order to carry away as many of their purchases as possible, and by so doing save wrapping paper. A large proportion of this paper is made from pulp which is imported from abroad.

Customers can therefore help the national war effort by dispensing, as far as possible, with wrapping paper, and help the Stores’ Management to reserve the rationed amount for those articles which particularly require to be wrapped

As well as a shortage or wood and paper pulp the following was also true:

Waste was criminal in the Second World War – sometimes literally

In 1942 it became illegal to throw away or burn paper, No 48 Paper Control Order, 4 September 1942, brought paper supply under the control of the Ministry of Production.

With national supplies running low, all waste was frowned upon