You are here: Home>Topics>Wartime>WWII>Spitfire Week - October 1940 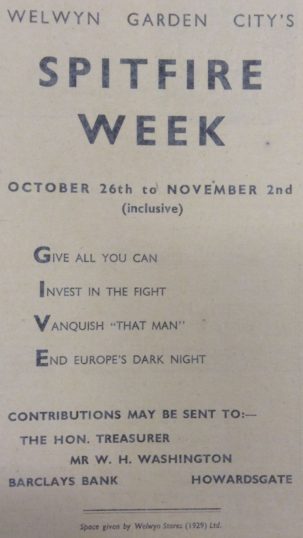 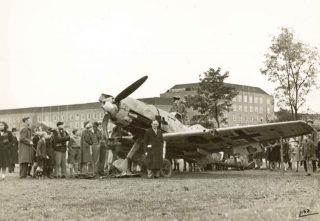 26th October to 2nd November 1940 was Spitfire Week in Welwyn Garden City, the idea  being to raise money towards the purchase of a Spitfire aircraft. Many events were arranged throughout the town together with donations from individuals and companies. Events included dances, social functions, street collection, Barrel Organ collection, bring-and-buy sales. A popular event was a “Go-As-You-Please” smoking concert which was held at the Cherry Tree. There was also a donation from an individual which amounted to 1 penny for each German aircraft that had been shot down by this stage of the war, some 2,349 planes.

On the Campus was displayed a Messerschmit  Me109 which had been shot down by the RAF. This proved a big attraction to young and old, raising £58 1s in donations though there was an expense of £36 2s 9d to cover transport and labour costs for the aircraft.