You are here: Home>Topics>Wartime>WWII>VJ-Day in Welwyn Garden City 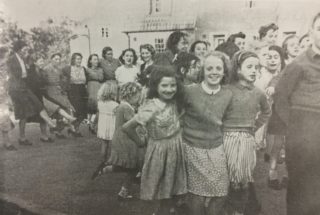 VJ Celebrations in Welwyn Garden City, held on Thursday 16 August 1945, were much quieter than those on VE Day. Crowds were smaller and there was little going on around the town.

A thanksgiving service was held on the Campus attended by around 500 people. The town band provided the music, hymns being sung by the Male Voice Choir. The band continued into the afternoon. In the evening on the Campus, Maisie Willcox’s orchestra provided music for dancing though it took awhile before anybody took to the floor. Later there was a bonfire and fireworks.

The statue on the Campus was painted with blue and white ‘clothes’. The Welwyn Department Stores had all its lights on and a large V sign fixed on the roof. The Shredded Wheat factory was flood lit and arc lamps picked out the flags of the United Nations on top of the Council Offices.

The celebrations came to an end with a heavy downpour of rain.

There were some street parties, Knella Green and Beechfield Road, plus there were a number arranged for the week-end.

Later the following month, a Children’s Victory Party was held which was very much a day for children. The date selected was 22 September 1945 and the venue was Handside Playing Fields which were lent free of charge by the Welwyn Garden City Limited company.

The celebrations were for children between 5 and 14 years old with some activities for the under 5s. A number of entertainments, amusements and races were planned which were free; no tickets required except for the Cinema and Puppet shows. Fancy Dress Parades were planned with prizes for the best costumes.

The Programme for the day was:

A ring of 20 bonfires lit by the winners of the sports events.

On the day, despite a shower of rain during the afternoon, the children besieged the fun fair and entertainments.  Films being shown at the Welwyn Theatre were ‘My Friend Flika’, a cartoon and News. The younger children watched  ‘Panto Puck Puppets’ at the Community Centre.

Fancy dresses winners included ‘Dick Turpin’, a plumber, a snow man, ‘Mrs Mopp’ and an assortments of ‘Bo-Peeps’. The winning tricycle was made into a warship.

Small girls bunny-hopping and the obstacle races caused much amusement during the sports. It was an exhausting day for the stewards controlling the fun fair rides, many being ‘steward powered’.

At dusk, seventeen bonfires made out of broken Mosquito aeroplanes were lit simultaneously and seventeen rockets shot into the air.

As the fires died down, the voice of the announcer at the Committee tent was heard over the loudspeaker complaining bitterly of an overwhelming number of lost children.