You are here: Home>Places>Neighbourhoods>Panshanger>Panshanger Development 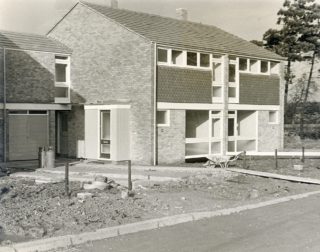 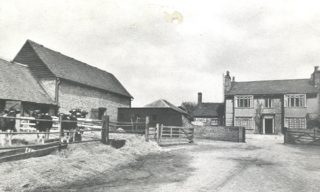 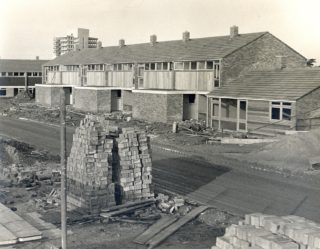 Panshanger E1 & A1 housing. Dec 1965. In the background you can see the Smith Kline Tower on Mudells
Hertfordshire Archives and Local Studies

For as long as anybody could remember the Panshanger area, that would eventually become the largest area of housing in WGC, had been just a few old cottages and an old barn surrounded by open fields.

The area, called Grubs Barn, was no more than a small hamlet, named after the ancient barn which stood nearby on the Hatfield-Tewin Road, approximately opposite the Sir Frederic Osborn School. Adjacent was Attimore Hall Farm, covering some 300 acres. The farm was run by the Masson family, who had been at Attimore from the turn of the 20th century, but by the early 1960’s it was in control of the Sherriff family. Many of the original farm buildings, which lie at the bottom of The Ridgeway, have since been developed, notably the Veterinary practice and the Attimore Pub, originally the Attimore farmhouse which opened in August 1988.

The first phase of the Panshanger development began in 1964, and was completed late in 1965. These homes sold at prices between £3,300 and £4,200, with the first families moving in during April 1967. Phase One, which centred around Daniells, comprised 437 houses and 53 bungalows. There were 700 applications for these first 500 homes.

As the development progressed Black Fan Road was extended for a mile to join Cole Green Lane, just below the then level crossing at Holwell Hyde. The road was officially opened to traffic in 1965, though it had already been used for some time by learner drivers, as a quiet place to practice.

The second phase of 128 houses, on the west side of Herns Lane, was completed in 1968, and this scheme was commended by the 1968 Civic Trust Awards.

These homes in Daniells, Westley Wood, Wren Wood and The Moors, were deliberately built at a low cost to help young couples buy their own home, but no sooner had the first 50 families moved in, they reported that the windows leaked, and the brickwork was porous and let in large amounts of water.

This was a 28-acre site on the east side of Herns Lane, comprising 198 houses and 6 bungalows. This phase started in 1970 with the first residents moving in July 1972. The discovery of swallow-holes caused considerable delays with this phase and special pilings had to be driven into the ground at various points to strengthen the structure.

Throughout the 1970s, work on the Panshanger estate continued. In August 1975, the Commission For New Towns, started developing 213 acres. Meanwhile the Guinness Trust built houses in Hardings.  Unfortunately, facilities needed by the growing population of Panshanger had not kept up with the house-building programme. Residents complained of no post boxes, ‘phone kiosks, and no shops, although a small supermarket was opened in April 1969. They had to wait until the late 1970s, when The Moors Walk shops were opened to avoid a trip into town.