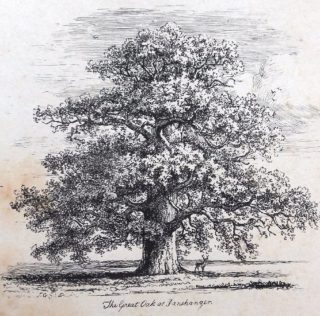 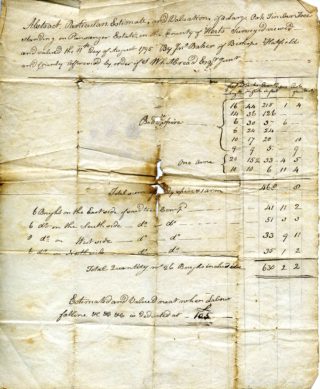 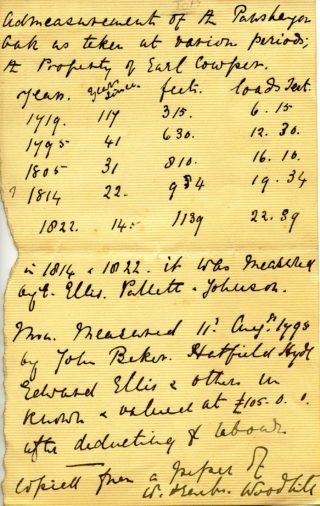 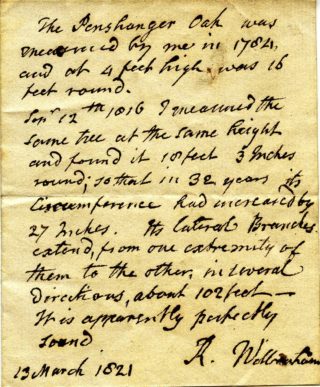 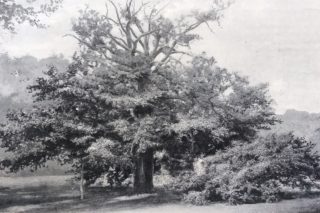 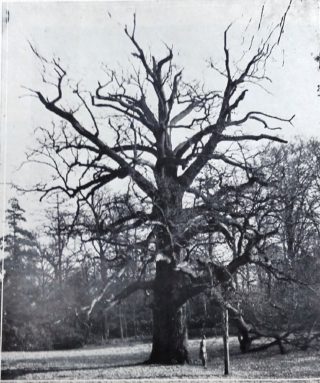 In the Autumn of 2015 Herts and Middlesex Wildlife Trust and Lafarge Tarmac opened a 2 km nature trail on the Panshanger Park Estate, it was called the Oak Trail.

The trail offered the public access to features for the first time in history such as the Orangry, which is in ruins and the only remaining building from the days when Panshanger House stood in the Park.

The other feature is Panshanger Great Oak. This is believed to be the largest single-stemmed oak tree in the country and it stands about 65 feet (19.8Metres) tall and 26 feet (7.9 metres) in circumference.

The exact age of the Great Oak is not know but it is believed to be about 450 years old.

Hertfordshire Archives and Local Studies have a group of volunteers that come in on a Monday to help with conservation on various collections that we hold. The latest project has been to sort through the Panshanger collection and rebox it to make it easier to store and handle.

Whilst doing so they stumbled across some papers that give some information on this great tree.

At various periods of time this great tree was measures, reviewed and its value estimated.

“Abstract, particulars, estimate and valuation, of a large oak timber tree, standing on Panshanger Estate, in the county of Herts, surveyed, reviewed and valued the 11 day of August 1795, by John Baker of Bishops Hatfield and county affoersaid by order of S Whitbread Esq”

There then follows a chart with lots of numbers but it is possible that its height at this time is 16 feet (4.8 metres) and it girth is 44 inches (1.1metres), and is measured at various intervals up the tree.

The estimated value (after deducting labour) was £105.

The next document is a bit more complicated to understand as the headings are not explained very clearly however, one heading is of interest, that which says Years since!

“Admeasurements of the Panshanger oak as taken at various periods. The property of Earl Cowper”. It then has four columns, the first of these is headed ‘Years’, the first year being 1719 the last 1822.

The next column says Years Since, what that means, we don’t know, could it mean the last year it was measured.The first date concerning the tree is given as 1719 and has 117 in this column, so this would give a date of 1602, 414 years ago.

The third coulmn just says Feet, what was measured is not clear because at the date of 1719 it says 351 and in 1822 it say 1139. Could this be the estimated amount of cubic feet of timber, as mentiond in an article in Herts Countryside, Vol 1, page 12, dated Summer 1946.

The last column say Load Feet and give figures for each date. Again it is not known what is meant by ‘load feet’

The final part of this document reads:

This document is a copy from someone by the names of Woodhill, the first name is hard to read.

The Herts Countryside article also mentioned that ‘Arthur Young gave its girth in 1804 as 17 feet, five feet from the ground. A further measurement in 1805 showed the marvellous vigar of the tree, comments the county historian, Clutterbuck, for it then contained 796 cubic feet of timber‘

The last document reads as follows:

September 12 1816 I measured the same tree at the same height and found it 18 feet three inches round; is that in 32 years its circumference had increased by 27 inches. Its lateral branches extend, from one extremity of them to the other, in several directions, about 102 feet. It is apparently perfectly round”. Dated 13 march 1821 and signed R Wilbraham.

I have yet to undertake this walk, when I do I will add a photo to this article so that we can see what the Panshanger Oak looks like today.