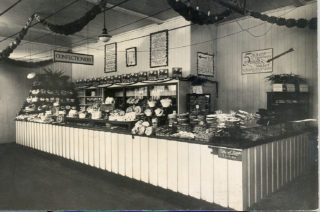 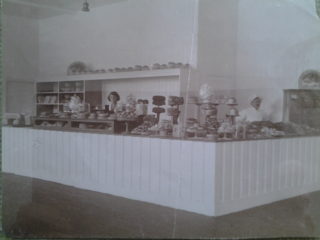 In this recollection Rita and her friend Charlotte were preparing for the visit of Carl Heath, the father of the present-day Quaker movement.  At this time the Quakers had been concentrating their work on relief and reconstruction after the first world war, and had just finished a mass feeding project in Germany during 1920 – 1922. No doubt this would have been the topic of his talk during his visit to WGC

Tonight Carl Heath is coming. The Quakers have invited a lot of people for a social tonight, and tomorrow he will give his talk.

I promised to bring 24 tartlets and some biscuits for tonight.

Charlotte decided to make a cake, and it rose and rose until it emptied itself all over the oven, leaving a little damp mess at the bottom of the tin! We started all over again. The second was successful, in fact really beautiful. To improve it still further Charlotte decided to give it a little longer in the oven. Well, the upshot was that she forgot it, and it was reduced to a lump of charcoal!! Next day we took courage again.

The first rose beautifully. Charlotte put it on a plate where it sank to a pancake, and five minutes later, out came the fourth cake as hard as a biscuit. We looked at each other in silence, and then burst into hysterical laughter! There was nothing to do but to go out this afternoon and buy 24 meringues to compensate, and forget the expense.