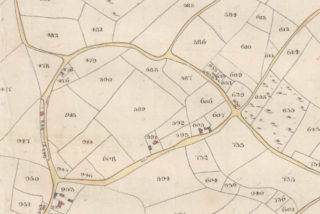 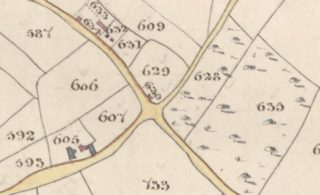 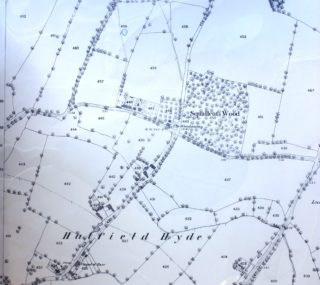 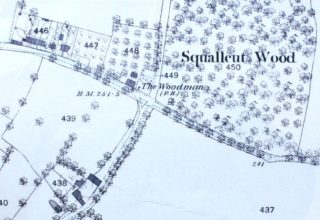 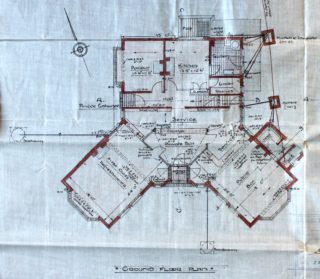 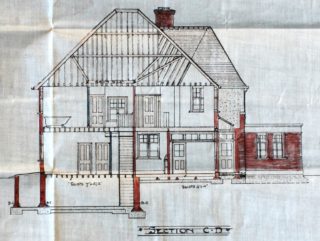 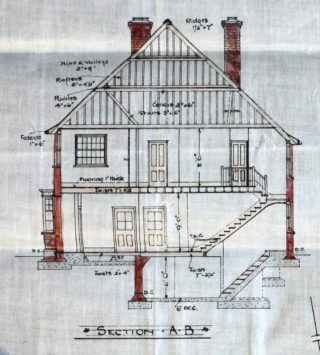 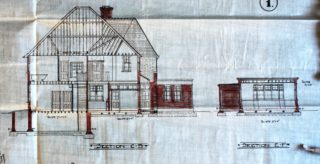 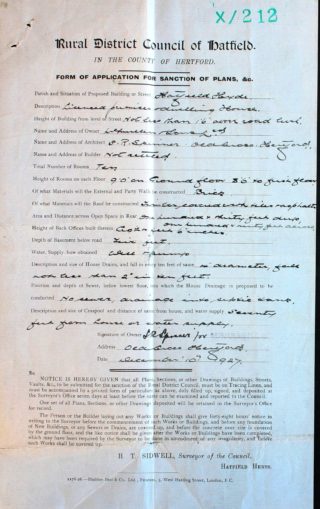 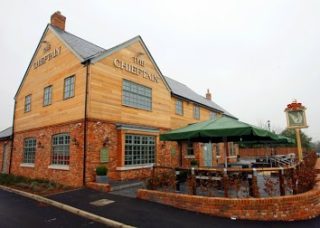 What “The Woodman” public house looked like before the photograph of c1927 we do not know, but we can trace back some of its history.

The first map is the Hatfield Tithe Map of 1838, you can see the roads are clearly marked in yellow and buildings in red for dwelling properties and grey for out buildings.

Plot 630 on the corner of the crossroads is marked with a red building and according to the apportionment book that goes with the map, dated 1839 the owner of the property is Nathaniel Cheek, a Master Butcher of Hertford, the occupier is William Howe. His occupation is not given but the property is described as a “cottage and garden”. No mention of an Inn or beerhouse.

Nataniel and William are also owner and occupier of plot 629 next door, which is listed as pasture.

On the 1841 census William Howe has the occupation of Woodman, his age is given as 45 and he is with his wife Martha and their children James, 15, Thomas, 7 and Sarah, 4. In the next household is his Mother-in-Law Elizabeth Munt, 75 and his son William,11, there is no mention of a beerhouse or inn.

On the next map, dated 1880, you can see “The Woodman” is clearly marked, but, if you look at its position in relation to the Tithe Map, you can see that it has moved along the road and is now in the area of plot 629 on the Tithe Map.

This begs to question, was the building in plot 630 ever a beerhouse or the original “Woodman”!

On the 1851 census William Howe is still in Hatfield Hyde and his occupation is still woodman. His Mother-in-Law is living with him and his wife Martha and daughter Sarah, his sons have moved out.

However, also on the 1851 and 1861 census, living in Hatfield Hyde is George Lawrence, he is listed as being a grocer and Victualler (licenced to sell beer), he became the publican of “The Woodman” as he is listed as such in the 1871 census.

There are no road names on the census or on either map.

In 1881 the census show that “The Woodman” has changed publican to a Thomas Whittenbury. He is there with his wife Sarah and four children.

In 1891 the publican has changed again, this time to a George Cooper with his wife Elizabeth and their five children. George cooper can be found as the publican in the 1901 and 1911 census, in fact he can be traced as being the publican through to 1918 using Kelly’s Directories, and to 1920 in the Electoral Registers.

In 1921 Albert Henry Summerfield became the landlord and is listed with a Ruth Eliza Summerfield.

The Electoral Registers from 1924 to 1932 do not show “The Woodman” or Albert Summerfield as listed.

In 1927 plans were passed to to rebuild “The Woodman” public house. It is possible that the photo of “The Woodman” was taken for the opening of the new liceneced premises.

It is possible that the man standing in front of the window in the photograph could be Albert himself.

The outline shape of the pub can be seen in the first site plan of the pub. The plans are quite detailed and can be viewed at Hertfordshire Archives and Local Studies Ref UDC21/77/208

On the 7 May 1936 the following article appeared in The Welwyn Times on page 7:

“Extensions to The Woodman

Starting this week extensive extensions to “The Woodman”, Hatfield Hyde, are in progress. Mr G Jenkinson, the licensee, tells us that when the extensions are completed “The Woodman” will be twice it’s present size.

In the new “Woodman” there will be facilities for catering for wedding parties, dancing and club meetings. Mr Jenkinson has had a wide experience in the catering business.”

You can see in the picture of the last Ordnance Survey Map dated 1939 how the shape of the pub has changed compared to the site map of 1927.

Following on in the Welwyn Garden City directories the following were publicans:

In the interim directories The Woodman is listed in Cole Green Lane but no publican names are entered.

In October 1976 work began on transforming “The Woodman” and £130,000 was spent on the refurbishment. In 1977 the Woodman bar was opened and a lounge bar replaced the welsh, green and red bars and the old off licence, it now served full meals and snacks.

In 1978 “The Woodman” changed it’s name to “The Cheiftain”. The name was chosen because during Roman times a tribe of Belgae lived in a settlement where Panshanger is now. The pub opened under it’s new name in June of 1978, offering free drinks on the day. The landlord was a Mr Chris Llewelyn.

In September 2006 McMullen’s Brewery lodged plans with Welwyn Hatfield Council to demolish “The Chieftain” and replace it with a smaller pub, nine three bedroomed houses, 14 two bedroomed flats and a single bedroomed flat. The managing director of McMullen’s, Peter Furness-Smith, described “The Cheiftain” as being out dated and a monstrosity.

On 18 January 2007 the council planning control rejected the plans for a second time, siting over development and being out of keeping with the character of the surrounding area. The residents and community that used the pub had won their battle with the brewery.

Unfortunately, their fight did not save “The Cheiftain” for long, as the last pint was pulled in November 2007, when McMullen’s pulled the plug on the pub and closed it for good. They said that it was not viable in its current condition and they were losing money, but they wanted to keep a pub on the site, they just needed to get the planning right.

But, tragedy struck on the night of Friday 29 February 2008 at 5pm, a huge fire ripped the derelict pub apart. It was left a gutted shell after the blaze.

40 police officers kept the public at bay and residents from Upperfield Road and Cole Green lane were evacuated. The surrounding roads were shut off to motorists.

By 1am on the Saturday morning, the blaze was finally under control. 54 residents in the Cole Green Lane area had their power supply disconnected from 8.15pm on the Friday until 2.50pm on the Saturday, when it was restored.

A look at the site on Saturday morning showed the severity of the fire, and it is comforting to know that no one was hurt during the incident.

A third planning application had been submitted to the council, but had been put on hold pending more information. Peter Furness-Smith said that the fire changed nothing, it made no difference to their application and they hoped their application would be successful , it had nothing to do with the incident.

In November 2009 plans for The Cheiftain site were resubmitted and included 12 three bedroomed semi-detatched dwellings with car parking.

On Wednesday 30 June 2010 a new licence was granted for the new Chieftain. It would be a different style of pub, more modern and smaller than the old one, about half it’s size. There were conditions of the premises licence, the outside seating would be closed to customers from 10.30pm each day and the garden would not be used between the hours of 11pm and 7.30am due to the close proximity of local housing. The pub would be solely a food and drink place with no live music, only background music would be played.

The rebuild cost £1.4m and is 2,000 sq ft. It will be run by Jennie and David Higgins, who have worked for McMullens brewery for more than 10 years.

There was no mention of further housing developments to be built on the site despite previous building applications.