You are here: Home>Topics>Sport and Leisure>Theatres>Fire at the Welwyn Theatre 1962

Fire at the Welwyn Theatre 1962 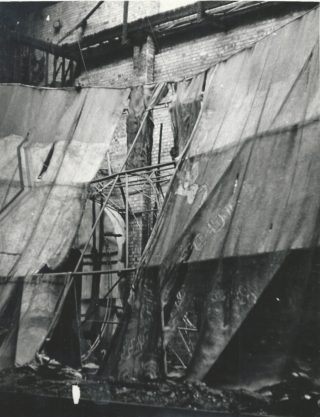 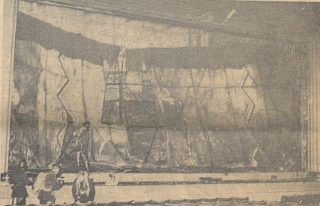 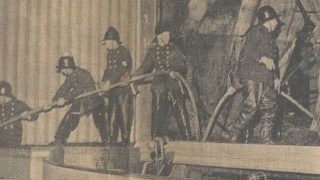 Firemen working on the stage
Welwyn and Hatfield Advertiser 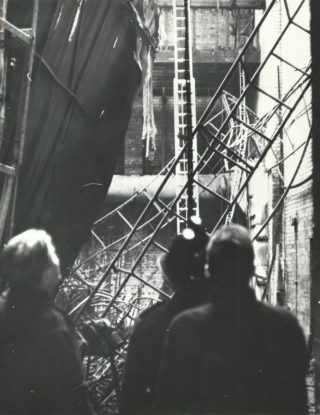 The stage of the Welwyn Theatre was engulfed by fire early on Wednesday 28th November 1962. Two hours before, the Welwyn Thalians had just finished their opening night of Carousel. The blaze destroyed scenery and stage fittings sending flames through the roof threatening to destroy the building.

The fire was first noticed by a resident in Church Road after hearing a lot of popping which was the roof tiles going up.  Some 35 firemen from Welwyn, Welwyn Garden City, Hatfield, Hertford and Letchworth attended the blaze which was extinguished by around 1.30 in the morning.  At one stage, the firemen were fighting to prevent the blaze leap-frogging the narrow gap across into Cresta’s workrooms, the Parkhouse flats and the new telephone exchange in Howardsgate.

Later in the day, the firemen brought out the bedraggled costumes but the scenery and properties had been destroyed.

The theatre was saved by the automatic descent of the safety curtain which cut of the fire from the auditorium. The fire was believed to have been caused by a cigarette or light accidentally dropped on some material and had thought to have been smoldering some time before the fire caught.

The Thalians had sold some 5,000 tickets and were expecting full houses.  However, two days later, the Thalians opened again at Heronswood School using as many of the original costumes they could recover.

In the mean time, the Theatre proscenium arch was filled in to allow the cinema to resume performances within two weeks.