Commemorating the work of Mr Herbert and Mrs Dorothy Bonney 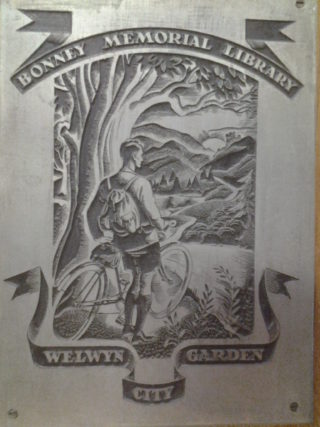 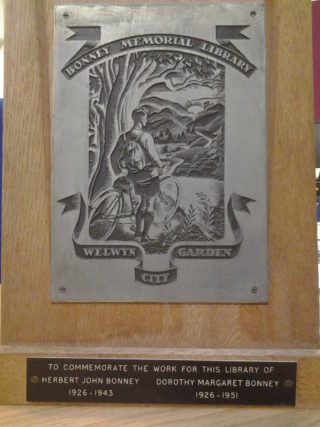 The Bonney Plaque was presented to The Library in c1945 to commemorate the work of Herbert Bonney, who was for seventeen years the voluntary secretary of The Welwyn Garden City Library.

After his death in 1943, The Herbert Bonney Memorial Fund was set up to raise money for the purchase of books to form a small memorial library at the public library in Guessens Road.

In all, about seventy books were purchased including a fifteen volume Encyclopedia Britannica.

To commemorate the work of Mr Bonney, a plaque was designed and donated by Mr Stanley Herbert. This was mounted on a wooden stand by Mr Fred Garrod. The plaque was displayed for many years in the library alongside the collection of books.

During his time as Secretary, his wife Mrs Dorothy Bonney also voluntarily served as Librarian, but was appointed to be a permanent paid Librarian by the County Council after her husbands death. It it lovely to see that she is also mentioned on the bottom of the plaque.

The plaque now returns from storage, to be on display in The Local Studies Collection at Welwyn Garden City Library, Campus West.