Moving to Welwyn Garden City in 1946 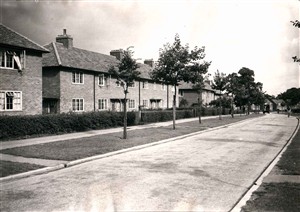 The left home on Knella Road where we lived, 1947

After living for 9 years in a 3-bedroom scrubby terraced house on Stonecross Road in North Hatfield, Mum and Dad decided they’d had enough of Hatfield. Mum’s work was declining, and knew her job was not going to be in existence for much longer. Dad, prior to World War II, had tried moving to Welwyn Garden before but his attempts succumbed to nothing. The terraced houses were demolished in 1947 after the majority of them had became uninhabited due to the poor conditions, and rebuilt to what they are today.

In June of 1946, my father managed to secure a high-paying job in the senior roles of the Welwyn Iron Foundry. The foundry used to be situated where today Digswell Park when we moved there (I hope I remembered right – it was by a park which I always thought was Digswell Park).  It was the day before we all left to live in WGC that Mum told me I would be attending Peartree School – I remember having a tantrum over it since I didn’t want to move school. In the end, I was glad I had moved school.

It was July 2nd that we left our home on Stonecross Road. Quite early, we walked to the train station. The roads were quiet, as they always were, but with some commuters. Hatfield was actually quite worn out after WWII – the lovely sights, the stylish homes and the well-dressed nobles had all disappeared. Well, at least, that’s how we interpreted them. The homes I stared at on the walk since they’d all been damaged in some way or another, and before I knew it we were on the station platform. Then, we got on in one of those fashionable carriages with an old lady who resembled a rich, elegant figure in my mind. The lady remained silent throughout the journey; didn’t speak, not a peep.

The next thing we knew, we were at Welwyn Garden City’s train station. I looked around and in the very distance were bunches of houses that to me looked very posh and nice, and quite to my mum’s admirable taste did they match. We got off, and went through the station. Dad got out his rather torn map, and we walked. Whilst walking, the homes looked so pleasurable. After about 15 minutes, we arrived at the home. It looked so nice and comfortable. I left the home in 1961 with my wife, but my parents left in 1967.