You are here: Home>History of Welwyn Garden City>Where Do You Think We Worked?>Welwyn Film Studios

Welwyn Film Studios made several films with a war theme and, in order to shoot scenes requiring explosions, used the gravel pits in WGC (now the site of Gosling Sports Park). 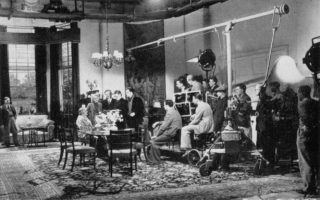 As part of the Welwyn Garden City Heritage Trust’s ‘Where Do You Think We Worked?’ project pupils from Onslow St Audrey’s Heritage Group kindly agreed to research the Welwyn Film Studios. As well as visiting local archives they paid a visit to the BFI archive to learn more. Here are some of their findings together with some memories of the film studios recorded by other volunteers during the project.

“Welwyn Studios opened in 1928 at Broadwater Road, WGC, for British Instructional Films (BIF). Producer and director Bruce Woolfe, was Managing Director and the Studios specialised in geographical and historical documentary and nature films including the ‘Secrets of Nature’ series before Woolfe began to focus on feature films including Anthony Asquith’s A Cottage on Dartmoor (1929). This was one of the first ‘sound films’ although some dialogue and music were in fact added later.

The 1927 Cinematograph Films Act required British cinemas to show a quota of British films and inadvertently led to many household names making early cinematic contributions at Welwyn, such as Ann Todd, Ralph Richardson, Margaret Lockwood, Bela Lugosi and Alfred Hitchcock. A larger sound stage was added to Welwyn Studios in 1930.

The Studios were absorbed by John Maxwell’s British International Pictures (BIP) based at Elstree Studios in 1931. It was mainly used to accommodate overflow productions from Elstree and hired out to other production companies such as Gaumont-British who made WWI drama I Was A Spy in 1933. A new production company, Welwyn Studios Ltd was set up in 1935.

Maxwell switched main production to Welwyn Studios in 1939 since, unlike Elstree, it was not requisitioned in the war. Alfred Hitchcock, among others, returned to Welwyn Studios to make propaganda films to aid the war effort. Welwyn was taken over by Maxwell’s latest incarnation, Associated British Picture Corporation (ABPC) and it was used by various production companies throughout the 1940s. The Boulting Brothers’ crime classic Brighton Rock (1947) was made there, as was I Live in Grosvenor Square (1945) and Piccadilly Incident (1946).

The facilities became dated, and commercial pressures eventually forced ABPC to sell Welwyn Studios to tobacco company Ardath in the late 1950s, bringing to an end the three-stage studios that had produced over 70 films, contributed to the war effort, introduced audiences to many cinematic stars and been the home of many classic films, still enjoyed today.”

For more articles on the film studios follow this link