You are here: Home>Places>Hospitals>The day the Queen came to town.

The day the Queen came to town. 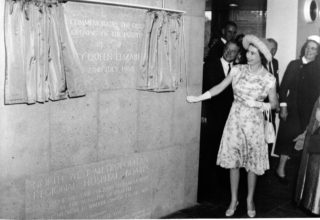 The Queen opens the QE II hospital in 1963
WGC Library

All my friends and I were wildly excited when the Queen came to town to open the Queen Elizabeth II hospital in 1963.

I was at at Rollswood School and I remember marching from school all the way down Howlands to sit in a position ,just opposite where I lived at 405 Howlands, near the junction of Hollybush Lane and wait for her car.

There were lots of other children there and I suppose a number came from Creswick School at the other end of Howlands.

I think we must have had flags to wave and I heard later that they had been supplied by local author, Barbara Cartland, as the local council said they couldn’t afford them.

After the Queen had driven by I thought, “that’s good, I’ll be able to go home now”, but we had to walk all the way back to the school and finish our lessons.

Do you remember the day the Queen came to town, on this occasion and on the hospital’s anniversay in the 1980s? Why not log on and share your memories with others.