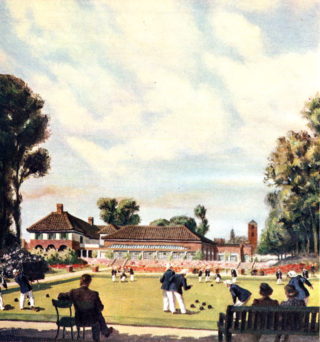 This charming painting of the Bowling Green, adjacent to The Cherry Tree, now Waitrose, was painted in 1948 by Bernard Venable. It appeared in a pamphlet “Inns of Sport”, published by Whitbread the brewers in 1949.

The bowling green was the home of WGC Bowling Club for many years, until it was purchased for the new supermarket in the early 1990s. The greens were completely relaid during 1948, and it is possible this is why the painting was commissioned. The new plans meant turning the area of the bowling green into the supermarket’s car park, effectively covering it over with tarmac, which deeply offended those in the bowling club who had scattered the ashes of friends and family on the green. In 2008 the surface car park was replaced by a split level structure after a major refurbishment of the supermarket.