You are here: Home>Topics>Wartime>WWII>Eugene F.H. Strauss: Some 1940s Memories of Welwyn Garden City 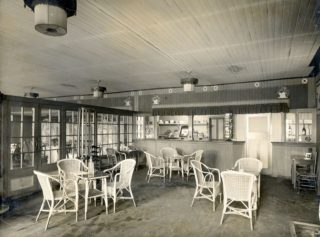 In the early days of the Blitz, circa 1940 when I was 15, my widowed mother and I — together with two sisters-in-law (obviously my married brothers were much older) — moved from London to Welwyn Garden City. I had left school at age 14 because the large London school had been evacuated to a small Berkshire village where we had classes afternoons only one week out of two. We were learning little and the family could do with whatever small income I might be able to earn. We were Jewish refugees from Nazi Germany. So much for background.

My first job in W.G.C. was as a waiter at The Cherry Tree, then a restaurant, Public and Saloon bars with a dance hall. The manager, a Mr. Godlington — everyone called him “Mr. G.” — thought it would be better if I claimed to be from Holland rather than from Germany.

The Cherry Tree was a Whitbread’s establishment and was well attended in both bars as soon as its doors opened every day. The restaurant too was quite popular and, being the only male dining-room staff, I was fairly soon promoted to “head-waiter” even though there were several much older and more experienced waitresses available. Such was chauvinism in those days! It made no difference to my wages or tips, but gave me the additional duty to prepare the staff roster for table assignments and days-off.

One of my regular lunch time guests was a Mr. Warwick Ward, a former film actor and by then in charge of the Welwyn Garden Film Studio on Broadwater (?) Road. One day I told him that I “wanted to get into films” and he invited me to come and see him in his office. He expected to offer me a stage-hand (or similar) job whereas I had planned to become a film star. That was the end of my film career.

Another regular of the Cherry Tree facilities, this time the ballroom, was a Miss Phyllis Kitley. She gave her dancing lessons there. She would order some tea which I brought her. She never left a tip, but when, in 1943 or 44, I left the Cherry Tree to become a war-worker at Brookside Engineering Ltd. on Bridge Road East, Miss Kitley offered me free dance lessons which I used to great advantage throughout my teens and adult life.

At the Cherry Tree I had “live-in” employment. Once I left there to work at Brookside, I lived with my mother in two rented rooms at 61 Parkway. I also joined some youth clubs and enjoyed the War-workers’ Club’s dances in the building above Welwyn Stores. (Was it called “Welwyn Restaurant”?) On at least one occasion the “royal photographer”, Lisa Sheridan, whose studio was on The Parkway, gave a slide-show of royal photos to the War-workers’ Club.

To train young people in democratic government, the Hertfordshire Education Authority established something called “the W.G.C. Youth Council”. This was a kind of youth-parliament made up of representatives of all local youth organizations. It was supervised by an adult W.G.C. Youth Committee which at that time was chaired by a Rev. L. O. Bowmer. I became chairman of the Youth Council and we used the local Council Chamber for our sessions. I cannot remember what momentous decisions we made, but recall that we organised at least one “Youth Week” with its opening ceremony on The Campus.

My friends and I also used to walk through “The Woods” to (“Old”) Welwyn to an open air swimming pool at “The Clock” (restaurant).

Although technically still “a friendly alien of enemy nationality” — naturalization ceremonies were suspended during the war — several refugee friends and I joined a local battalion of the Home Guard. We nick-named ourselves “the King’s Own Enemy Aliens”. Fortunately, no German parachutists landed on our territory. I think it was early in 1945 that our battalion was “stood down” at a beer-swilling “concert” at The Cherry Tree.

Having used some of my spare time to complete my academic education, I left Brookside Engineering shortly after the end of the war and eventually went to Nottingham University. I have visited W.G.C. from time to time, remembering the happy times of my youth.

In 1953 I emigrated to Canada where I now live in Toronto at the ripe old age of 89.