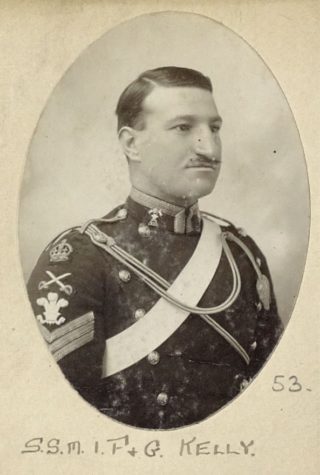 Although Welwyn Garden City was not founded until after World War I, there are links to that conflict by those who came to live here.   In 1925, when it was just newly built, Captain Arthur Kelly arrived at No. 6 The Quadrangle where he lived until his death in 1937.  His mortal remains, alongside his wife (to be confirmed) rest at Hatfield Hyde cemetery.

The obituary notice published in the Welwyn Times of 6th May 1937 reads like a “Who’s Who” of the movers and shakers of the early days of the town.  Captain Kelly was obviously a well regarded and respected member of the community.

The references in the obituary to “the Beloved Captain” refer to another military man, Captain Ronald Hardy, who in 1914 was given a commission in the Rifle Brigade, the 7th Battalion in “Kitchener’s Army”.  He earned the respect of his fellow soldiers and this soubriquet was recorded by Donald Hankey in “Student at Arms” essays.  Captain Hardy was killed near Ypres in 1915, and Donald Hankey on the Somme in 1916.  The essays are a chilling reminder of those battles.