A romance of two factories 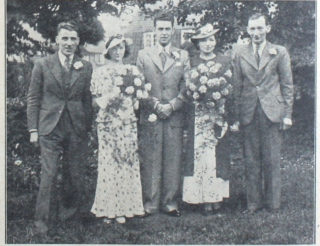 This wedding photo appeared in the Welwyn Times on 1 October 1931 on page 8 with the following article on page 7:

A reception was held at the bride’s home, and the couple then left for a honeymoon at Clacton-on-Sea, the bride wearing a grey costume with navy accessories.

The bridegroom is employed at Murphy Radio and an oak clock was presented to the bride from her former collegues at Beiersdorf Ltd.”

The people in the photo are as follows: