Delivering groceries on a bike 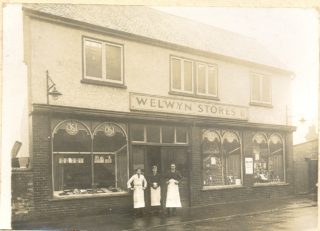 The outside of Welwyn Stores
Jean Pestle nee Bray

My father and his brother worked in the original Welwyn Stores.  I think the photo shows them outside the shop in the late 1920’s.

He told me that when he first started he was a delivery boy and he delivered groceries on a bike to the first houses when they were being built.