"I never know what I might find at Peartree" 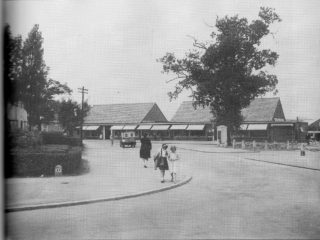 Peartree Stores pictured in 1949, taken from the end of Knella Road.

Construction began in May 1923 to build houses on Broadwater Road and Peartree Lane, and residents instantly complained there were no nearby shopping facilities or a place to educate their children.  With the fast building rate of homes, the council could not afford it so the residents continued to suffer. By 1928 Ludwick Way was built along with Ely Place, Ravenfield Road, Essendon Gardens and Bassingburn Walk (which became Ethelred Close) and with increasing number of complaints the council built and opened Peartree Primary School in January 1927 and then Peartree Stores, a branch of Welwyn Stores Ltd, in July that same year. It was a huge relief for the locals.

The original Peartree Stores was what Peartree Pharmacy & Peartree Lane Surgery is, a building of 60 metres wide and 14 feet high. To the right of the building was the butcher’s shop, which I remember sold tasty lamb on a Saturday special offer. About a month after they opened it they began building the extension (on part of the site of what is now Regent Close) which joined together by a 3 feet wide corridor and behind was staff area.  The extended shop was opened in May 1931, and Peartree Stores became an absolute bliss to shop in! After the extension was built a lot more counters were opened and they sold almost everything you could dream off – Mum’s favourite it was!

Welwyn Builders Ltd built a small car park to the left of Mill Green Road off Peartree Lane in 1934 which is still there. I think it was opposite the Rose Restaurant (run by British Restaurants Ltd – now Golden Valley) which was to the right of the butcher’s shop – only went in there a few times because we never ate out then. Between the school and Peartree Stores was a mysterious lane that had a high gate full of trees round it so you couldn’t see through – my guess is that it was to a private estate. They demolished it in 1975, when I was up in Lancashire, so I never saw what it was. Next to this little lane was a plot of open land and the council had received many applications for build on the plot, but instead the Development Corporation bought the land just after the Second World War began and made into a War Office shop that sold all sorts of supplies for the war effort and advice for our survival as civil citizens.

In the Second World War Peartree Stores had practically empty counters because of huge shortages, so they were only open on Mondays, Wednesdays and Saturdays which became quite inconvenient actually for residents. The War Office remained hooked with supplies because it’s what kept the war going. In 1947 the War Office was split into two: Peartree Post Office and the UDC Payment Offices which became very handy. You could pay your rates (now council tax), rent and water bill at the payment offices. The Post Office Counter No. 2 always had this little grey-haired old lady who was very stubborn, and had a very low male-like voice so we always avoided No.2 counter. The Payment Offices were often full on a Saturday, so we allowed plenty of time. A very busy place the Peartree shops were!

My mum absolutely adored Peartree Stores, and made her visit every Saturday when Dad went to Woodhall Stores and Mum went to Peartree Stores. I went with Mum one week then Dad the other week, so on so forth. The first stop was the Council Payment Offices, then into the Post Office and then into the main stores. She could spend about three hours mooching around in the main store, which of course annoyed me a lot. Then it was back home. I remember the counters as if it were yesterday: