You are here: Home>Topics>Events and Ceremonies>Royal events and visits>The Last Tribute to King George V 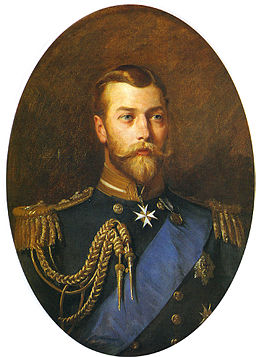 The following article was printed in the Welwyn Times in 1936. It is reporting the funeral train of King George V as it made its way from Norfolk to London, passing through Welwyn Garden City, on its way to Kings Cross. From there the funeral procession was to make its way to Westminster Abbey.

“The scene as the the train went through was remarkable. In addition to the crowds on the platform, the new footpath in front of The Studio was packed with silent crowds along the entire length, and the crowd in and near the station must have been nearly 2,000.

The train went through at moderate speed and with uncanny quietness.

Little could be seen of the interior of the funeral and royal coaches through the curtained windows except for occasional glimpses of sad, pale faces.  The crowd at the station included many factory workers and several artists from the Film Studio in their make-up.”

Have any other Royal Trains passed through Welwyn Garden City?