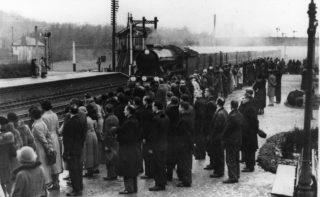 The photo shows people paying their respects to the late King George V as his body passed through Welwyn Garden City station on 23 January 1936, enroute from Wolverton to Kings Cross.

See also the article submitted by Susi Smith under the heading of Events called The last tribute to King George V.