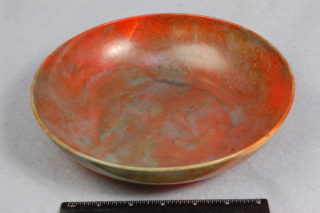 An early plastics factory in Welwyn Garden City (probably the earliest) was Kelacoma Ltd who began the manufacture of decorative interlocking wall-tiles moulded from urea-formaldehyde moulding powder, late in 1929 or early in 1930 in Broadwater Road on a site adjacent to the residential area and backing on to the railway. The company which had the London address of Ludgate Hill, E.C.4, had as its managing director a Mr A V Keller who lived at 10 The Valley Green, WGC from 1930 -1932; his neighbours said that he conducted many of his early experiments on a moulding-powder formulation in his garage there.

The company name (Kelacoma) had been formed by taking the first two letters of each of the four original director’s names: Keller, Lack, Coppin and Major.

The Kelacoma bowl in the photograph is one of a number moulded from Kelacoma moulding powder in their Broadwater Road factory, in a mould borrowed from Alban Moulded Products of St Albans, as an item to be given to friends and business acquaintances. This one had been given by Keller to Mr & Mrs D R Bergin of 16 The Valley Green (the donor’s parents-in-law) who used it as the fruit bowl in their house from 1930 until Mrs Bergin’s death in 1962.

The company however never prospered, and in May 1932 it was put into the hands of an official receiver at the instigation of one of its directors and another debenture holder. Its assets were then sold to William Somerville’s Sons Rubber Co. for incorporation into Croydon Mouldrite Ltd which they had purchased earlier in similar circumstances, the combined company henceforward being known as Mouldrite Ltd.

In 1933, ICI (wishing to acquire an interest in the conventional plastics of the time, to complement their own development of acrylics) purchased a majority holding of shares in Mouldrite Ltd; and it was this modest beginning that led to WGC later becoming the headquarters of ICI Plastics Division during its period of independent existence, 1938 -1983.

The Kelacoma Bowl is now in the Welwyn Hatfield Museum at Mill Green.

With acknowledgment to Eric Balley and the Welwyn Hatfield Museum