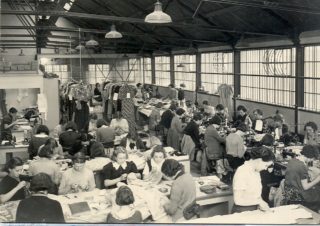 In 1929 Tom Heron, the father of the artist Patrick Heron, moved from St Ives to Welwyn Garden City and launched Cresta Silks in Broadwater Road.

The architect Wells Coates began his career when Tom commissioned him to design shops in London, Bournemouth, Bromley and Brighton. The work included the Cresta lettering itself. Tom also approached young artists to design fabrics for his new enterprise, such as the artists Paul Nash and Cedric Morris.

The company designed clothes for women and textiles. The curtains for the Shakespeare Memorial Theatre, Stratford upon Avon were designed by Cresta and on the Mount Everest ascent of 1939, one of the climbers was said to have worn Cresta pyjamas under his woollen garments.

The company left Broadwater Road in 1938, moving to a site adjacent to Howardsgate and again in 1954 the business moved into the Welwyn Department Stores. Debenhams then bought the company in 1957 before Cresta Silk finally ceased trading in 1980.