A vital role in the War effort 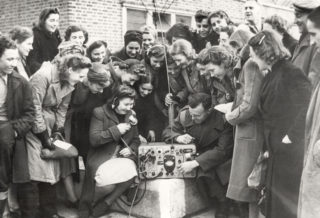 Troops paid a special visit to Murphy radio on 7 December, 1942.

The company’s efforts during the war producing electronic listening devices, radios etc played a vital role in the War effort.

Frank Murphy moved his company to Broadwater road in 1928 employing 8 people. By 1932, only four years later, he was producing over 33,000 sets a year and employing over 500 people.