You are here: Home>Topics>Wartime>WWII>VE - Day in Welwyn Garden City

The town celebrates the end of the war in Europe 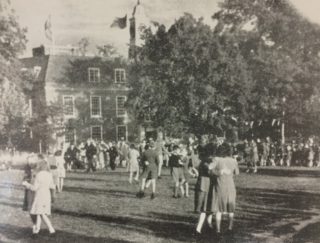 Dancing on the Campus
Welwyn Times 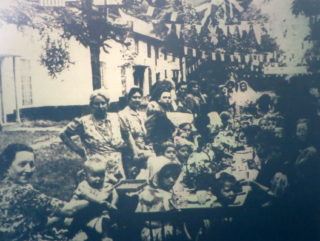 On 9th May 1945 Welwyn Garden City celebrated Victory in Europe Day (VE Day) a day later than the rest of the UK. VE Day was actually 8th May 1945, Welwyn Garden City decided to celebrate the day after because the Governments ‘sudden announcement’ of the day was too late to make organisational changes.

At a Council meeting the week before, Councilor Alan Bell, chairman of the V-day committee announced the following programme:

An open air service of thanksgiving on The Campus preceded by music by local choirs and orchestra.

Open air dancing on The Campus followed by community singing

A firework display at 10.00 though there were doubts this would happen.

Councilor Bell said “that the celebrations should express feelings of thankfulness and relief rather than hilarious rejoicing. This does not mean that people are not expected to enjoy themselves. It will be declared a public holiday and it was up to every one to enjoy themselves to the full.”

On the day, the biggest crowd in the Garden City’s history turned out with some 4,000 to 5,000 people dancing on The Campus. The dance floor had to be extended to accommodate everybody. At night some 6,000 attended the bonfire at Stonehills, no incidents were reported.

Earlier, the morning service was a solemn thanksgiving with white robed choirboys and the town’s clergy on a dais. Black rainclouds scudding across the sky made a moving experience.

The highlight of the day though was the Town Band leading Community Singing in the car park.

Effigies of Hitler were disposed of at three local celebrations. He was hanged on a street lamp at Blythe Mount and afterwards burnt. High Grove also had a Hitler for its bonfire.

At Handside Green they had a lifelike double of the Fuehrer made by a local artist which was consigned to the flames amid cheers from the residents.

Parties in the streets and closes were an outstanding feature of V-Day celebrations. In Knella Road a great evening was had on the 8th May  starting with children’s tea for eighty in the street. Mothers had spent the morning baking tarts and cakes and drawing on precious stores of dried fruits and jam. Out of £3 10s which had been collected for expenses, each child was given 6d. In the evening was a bonfire on Knella Green which was reported as being ‘just as big as the town centre one’.

Handside Green festooned with bunting. Bythe Mount provided tea for fifty children. In the evening, the cul-de-sac was flood-lit and residents danced on the green to a radiogram.

Barnfield Road entertained fifty children, The jellies and cakes left over were sent to the nusery in Woodhall Lane.

Two days later, during a dance at the Cherry Tree, a swastika flag was being raffled to raise funds for the Murphy Radio Comforts for the Troops Fund. An RAF pilot broke through the crowd, seized the flag and ripped it in half. He had just been released after three years in a German prison camp. Afterwards, the pilot together with another apologized for the disturbance and proceeded to make a collection which raised £7 16s 10d.