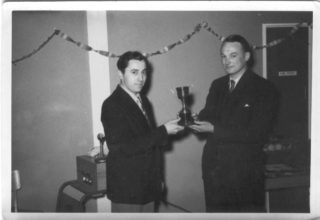 I moved to Welwyn Garden City with my parents when I was seven.  At that time Creswick school had not been built and so during my first year in Welwyn Garden City, I had to attend Howlands school which was in The Commons.

My school friends and I used to play on the building sites around our houses after school and in the holidays, we even played on the foundations of Creswick school before the school was built.

At that time Chequers stopped at the end of Howlands just outside the school fence.  It was only several years later that the road was extended through the woods to join up with Ascots Lane at Mill Green.

The first headmaster of Creswick was Mr. Grafton.  My father James Gardner and a group of friends and neighbours formed a social club which met in the classrooms and the school hall.  When numbers increased they moved the clubs activities to the Hyde House in Hollybush Lane.  The club then became known as The Hyde Club.

Before they left the school, the club presented Creswick school with the house challenge cup which I think they still use.

In the photograph my Father on the left of the picture is seen presenting the cup to Mr. Grafton.