Half day attendance during the War 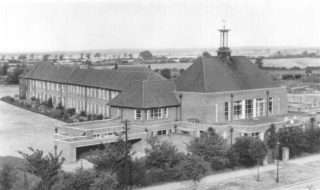 Postcard of the Grammar School

Chris’ parents came to Welwyn Garden City in 1929 when he was one year old. The family first lived in Longcroft Green.

“My earliest memories really were being taken to school. In those days Handside playing fields went from Longcroft Lane to Handside Lane. There was no Fordwich Road, no South Parkway, no Rooks Hill. The whole of that land was Handside playing fields.  And there was a path from our area in Longcroft Lane stretching right the way across to Longcroft Road and Handside Lane, and I can remember going to school when I was about five. So it’s 1933, and we walked across the playing fields to school. There was only one road to cross which was Handside Lane. I remember my first day at school. I didn’t like it so I put my hand up to be excused, to go to the toilet, and I walked home, only to be dragged back again by my irate mother. That was the first memory I’ve got.

I also remember at that time that the people living in that part of Longcroft Lane were all very friendly together. They got together and they mowed an area of grass on Handside Lane, on Handside playing fields at the back of the houses, and made a tennis court there, clubbed together and bought a tennis net, and formed a tennis club. They probably didn’t have permission or anything like that, but that’s what they did. And also my mother was a great whist player and she organised whist drives and, during the summer, they often took place in the back garden of our house in Longcroft Lane. Because we moved from Longcroft Green to Longcroft Lane in 1931.”