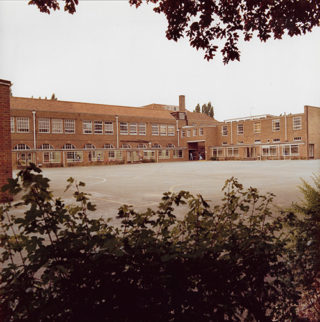 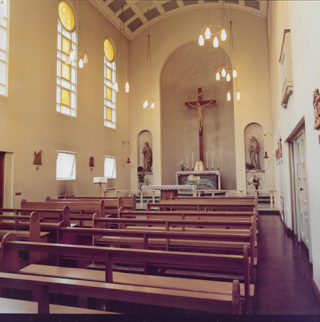 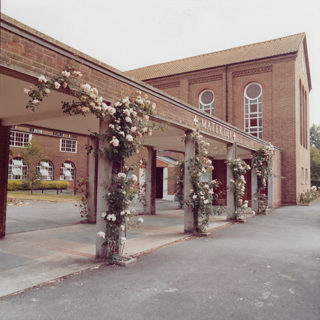 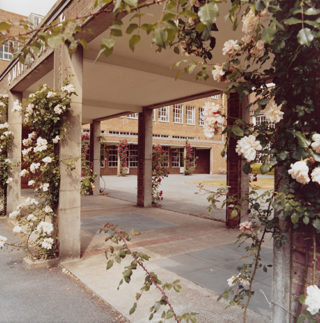 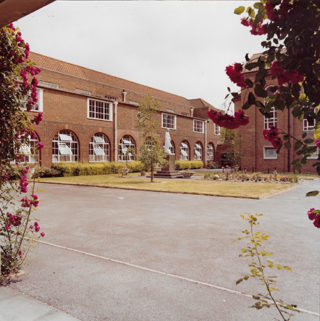 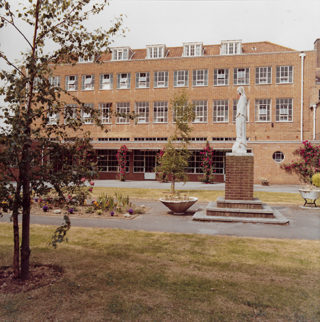 At the back of the school were the “huts” where many of the classes were taken until the school was extended.  There was also a large vegetable garden and the nuns kept hens. The huts were heated by round coal burning stoves surrounded by a fire guard , the nuns used to warm our milk on them for morning break. ( remember, at the age of 5 taking my own mug. I also remember my brother painting my name inside a napkin ring which we had to provide….and I still have it.

The school lunches were always tasty (or so they seemed when young and food was rationed).  We were introduced to minestrone soup. It was a tasty broth with what I think was penne pasta and vegetables.  We sat on benches at trestle tables.  The nuns could often be seen walking in the town and often small groups would walk to Sherrards wood…they would pass my house it was, I think, usually on a Sunday.

When the statue of Dawn was put up in Parkway, near the Convent we were instructed to close our eyes when walking  past it.  Our uniform was white Viyella blouse,navy gym slip, school tie and a girdle, white socks and shoes. In winter we wore navy gaberdine raincoats.  In summer we wore a navy blazer, blue moygashel summer dress and a panama hat……or we could still wear our berets.

In summer we played rounders and tennis and the tennis courts were used for netball in the winter. We also played hockey and I remember walking to the rugby club in all weathers and always being cold.   We, who were in the lower school, used to wait at the school gates so we could take the  seniors’ bikes to the bicycle sheds.

On Monday morning we would have school assembly when those who had come top of the class the previous week, would get “the medal”  and there was a prize giving at the end of term.

Our singing lessons were taken by Madam Burdett who always wore an academic gown.  We sang not only traditional English folk songs but also the songs of Ivor Novello.  We also had elocution lessons from Clare Saxon

The discipline was quite strict. Walking, not running in the corridors, standing up when a visitor or member of staff came into the room. If you were badly behaved you would have to sit with your hands on your head and when silence was required, put your finger on your lips.  We each had our own desks which had to be kept tidy and were checked regularly. Our lessons started in the morning with prayers.  We said the Angeleus at midday and ended the day with prayers.

I still have the drawn thread and embroidered table cloth and tray cloth made in needlework lessons.  I left the Convent in 1955 to go to the Further Education College (now Oaklands) which was then behind Applecroft School to take my school certificate.  I wanted to train as a Domestic Science teacher and I could include cookery in my subjects.

The Mater Dei School for Girls (writes Bev Stewart, nee Harries) had its antecedents in the very early years of the new town.  In 1922 three nuns from the order of the Sisters of St Magdalena of Canossa came to live in a house in Meadow Green to support the new catholic parish of St Bonaventure.  In 1926 the church with accommodation for two priests was built on the corner of Parkway and Birdcroft and in 1929 land adjacent was given to the nuns for their convent.  In 1934 the nuns opened a kindergarten for young girls and boys which eventually developed into the Canossian Convent School for Girls providing a catholic education for girls living in the new town and its environs (boys having to leave post-kindergarten).  This was a fee-paying school (altho’ waived for indigent catholic families) and by the 1950’s was offering education up to and including A-levels.  The school welcomed non-catholic pupils and was popular with families who wanted their girls to have a non-seculat education. Elocution, dancing and embroidery lessons were offered.

In 1959 the school was taken into mainstream under the auspices of the County Education Department and renamed the Mater Dei School for Girls, no longer fee-paying and open to all.  The site was quite constricted with little potential for development and the school eventually closed in 1978, the nuns returning to their mother house.  The original convent became the Focolare (Italian for “hearth”) Centre for Unity and remains so today while houses were built on what had been the tennis courts and the school hall was turned into flats, appropriately called The Cloisters.  The Centre was opened on 20 November 1986 in the presence of 30 Bishops representing five churches and around 400 members of the Focolare movement.

I started at the Convent School, Parkway,(as it was then known) in 1946 and was there from the age of 4 to 11. My mother was a teacher there during my time at school.

My predominant memory is of the lovely food we had at lunchtime. My first experience of Italian food. We used to have lunch and then a rest afterwards. We would go back to the infants’ classroom, put our heads on our folded arms on the desk and have a rest. Sometimes we would go to the Pavilion overlooking the tennis courts, and have a class there.

The nuns in the infants and up o age 11 were lovely, kind and gentle, Mother Pierina in particular and also Mother Gemma. I have very little memory of being taught, but I do remember reciting the Catechism and changing tables.

We had a junior school orchestra, I was the conductor. We went upto the Festival of Britain and gave a performance, along with various other schools. It was very exciting just going up to London, going to the Festival Hall and seeing the Skylon.

We were taught dancing by Marjorie Bailey and onetime, gave a concert where I performed the dance of the Sugar Plum Fairy I think I was about 7. There were supposed to be two of us but my classmate was unwell. I never forgave her, and shudder at the thought of it now.

We were also given elocution lessons Mrs Claire Saxon. Speaking clearly, and ‘properly’ was thought to be of great importance.

My final year at school was in my mother’s class. It was rather strange as I felt different to the other girls. Probably strange for my mother as well.

One advantage of my mother being a teacher at the Convent, was that after school, I went with her to the staff room where the teachers had their tea. I think I was given a drink, but what really stayed with me was sitting by an electric fire on my own, and studying a collection of butterflies in a glass case that was there and being fascinated by them. There was an old lady, Mrs. Spence who lived at the convent and had her tea with the staff. She was very fierce looking and I remember being in awe of her, I don’t remember her speaking to me or joining in the general conversation round the tea table.

I went to do the 11 plus at Parkway School with a classmate, and then left to go to another convent school, losing touch with my Convent classmates.

I was a student at Mater Dei School for Girls from 1966 – 73 and still have clear memories of entering the school building each morning under the rose covered arches.  The school was adjacent to the convent where the sisters lived and the smell of their tasty Italian cooking used to pervade the corridor.

The beginnings of the school date back to November 1922 when three Canossian Sisters of Charity from northern Italy arrived in Welwyn Garden City.  Their coming had been encouraged by the Catholic bishop of the Westminster diocese who was happy to have their presence in the then developing Garden City. The sisters lived originally at 17 Meadow Green and Mass for the Catholic community was celebrated in their house until St. Bonaventure’s church on Parkway was opened.

In 1929, the sisters built a much larger convent on the land adjacent to the church and used it to accommodate sisters from abroad as they learned English.   In 1934 they began to educate kindergarten children in this building – the embryonic start to Mater Dei school which eventually went on to welcome girls aged 11 to 18.

The Canossians must have kept the Meadow Green house for some time because Servite sisters and students from Our Lady’s Convent School in Stamford Hill, north east London were evacuated there during World War II. The Londoners found Welwyn Garden City very quiet and said that the Canossians were so “spiritual” they hardly knew when the war ended! I know this because, in my adult life, I taught for many years with the evacuees.

Nonetheless, as Welwyn Garden City grew, so did the Canossian commitment to education in the area.  In 1952, Mater Dei school was extended and became a fee paying school open to boarders as well as day students.

By the time I began to attend in 1966, Mater Dei was a three form entry independent school for girls aged 11 to 18.  I have happy memories of school so maybe I see it through rose-coloured glasses: I recall it being strict but caring with a strong sense of community. When I was fourteen, I caught pneumonia and had a long absence:  the sisters came to see me at home bringing little presents.  There were lots of extra-curricular events long before they became fashionable in schools. Speech nights, Christmas bazaars, school trips and dramatic productions always created a sense of excitement and belonging. Mother Velia was the head teacher who was omnipresent and knew everything about every girl.  In the playground, there was a large statue of the Sacred Heart in front of which all students lined up in silence at the end of morning and lunchtime breaks.  She was always there at the foot of the statue: I cannot recall a single day she missed throughout the seven years of my school life.

Mater Dei’s independent status was one of the reasons that led to its closure in 1981.  As comprehensive education became the norm throughout the country, there was a need to adapt and this was difficult for a relatively small establishment with its own strong identity.  In the late 70’s, Westminster diocese made the decision to close the school. This was strongly contested by many parents in the area.  However, the decision held and Mother Velia’s example, in her own words, enabled the students and staff to conclude “with their heads held high.”

In 1981, the school and convent buildings were put on the market for sale.  At the same time, the Focolare Movement was beginning to look for premises to use as a residential conference centre.  The Focolare is an ecclesial movement that began in the Catholic church in Italy and works for unity in all areas of society:  it contributes to the fulfilment of Jesus’ prayer “Father may they all be one.” (Jn.17:21) When Focolare members in Britain first visited the Mater Dei building that year, although very attractive, it seemed too large and expensive. However, it eventually became possible to buy just one  part of the school and convent:  the remainder was purchased by Hunting Gate property developers.  The Focolare took possession of their part of the building in March 1983.  This has gradually been refurbished and its facilities are used not only by Focolare members but by national and international groups.