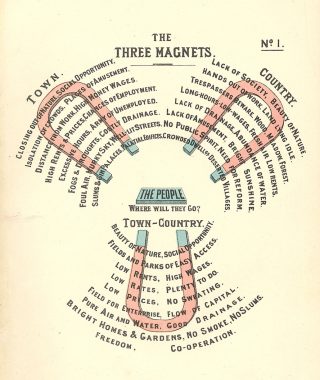 'The Three Magnets' diagram, from "To-Morrow: A Peaceful Path to Reform", by Ebenezer Howard, 1898. Howard created this diagram to explain and promote his idea for a garden city.
Hertfordshire Archives & Local Studies (ref DE/Ho/F4/1) 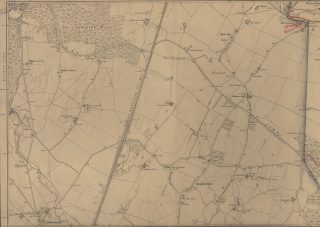 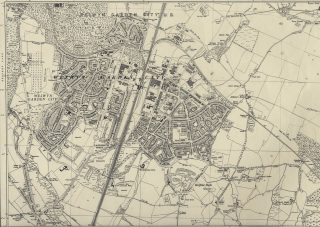 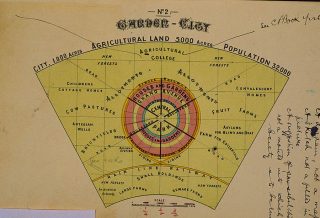 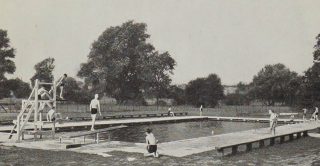 In garden cities, their founder, Ebenezer Howard, brought together the best of town and county life.  He intended them to provide high quality housing, green spaces, employment opportunities and good transport links. There was a strong focus on community governance, cultural and sporting activities, as well good health and easy access to nature.

Garden cities were zoned with industry separated from housing, shops and amenities and the whole town surrounded by agricultural land on which produce for the town could be grown.  Everywhere was to be walkable and the population would be capped. Once that limit was reached, another connected garden city would be constructed and linked by rapid public transport.  Although Howard would have liked the government to take his ideas forward, he was impatient and took up private investment instead.

The first garden city was created at Letchworth in 1903. World War One was not yet over before Howard began looking for a site for his second garden city.  He purchased an area of rural land to the north of Hatfield and work began on Welwyn Garden City.  First houses, then shops and businesses were established.  Marketing was important to attract both industry and residents.

Successful advertising campaigns focussed on the beauty of the town and healthy, happy life that could be lived here.  Major companies such as Nabisco and ICI established factories and became significant employers.

Howard’s ideas quickly spread and today there are garden cities, towns, suburbs and villages around the world…

Garden Cities and Settlements around the World