You are here: Home>History of Welwyn Garden City>Where Do You Think You Live?>A family arrives in 1924

An early encounter with a car in Valley Road

Learning about agriculture then farming at Stanborough 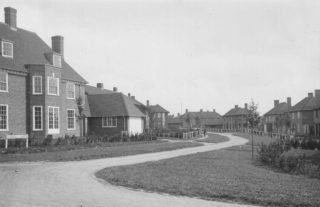 The information below and audio clip have been taken from an interview recorded by the Welwyn Garden Heritage Trust in March 2009.

Mary’s parents moved to the town in 1924 having married during the First World War.

“Most of the houses around here were more or less empty and they weren’t selling very well, so the local authority decided that the best thing to do was to rent them out so there were a lot of people living around here who considered that they were cut above us but they only rented their houses.

Now I did a survey of all the people who lived in High Oaks Road before the War by looking at the street directories and found that it was quite true that a certain number of houses the people were only living in them for say 2 years and the house was empty for a year and someone else came and only stayed a short while. But it was very interesting – because some of these people thought – made people think that they owned the property but that wasn’t important.

My mother came from Islington she had North Country parents but they lived in Islington. My grandfather worked for Great Eastern railway in the Goods Department and he looked after the banana warehouses and they were only a penny bus ride away from Kings Cross Station but anyway we often used to go up on the train to visit them. I think I’m right in saying that on Wednesday afternoon it was 1 shilling and 9 pence return to Kings Cross. I never knew my grandparents very well because they were quite elderly. They had already had 4 children before my mother was born”.

Mary’s father “had been serving in India with his regiment for five years, and when he came home he was allowed to have a Council flat because he earned over a certain amount of money. And he was looking around for property and he came to Welwyn Garden City and found that they didn’t want very much money put down to buy a house.” Working for a merchant bank in the City of London her father got a mortgage and bought their house in Dognall Green. “It cost him £1,175.”

On reaching school age Mary went to Handside School for a while then to a school in the City of London. During her time there War interveaned and she was evacuated with the school to Ashstead in Surrey. On leaving school she went to Oaklands Agricultural College and you can hear more about this in the second audio clip.