"father was appointed the chief air-raid warden for WGC"

Enjoying sports at school thanks to an inspirational Games Mistress 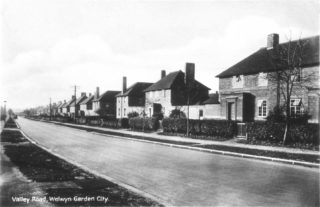 A postcard of Valley Road 1932 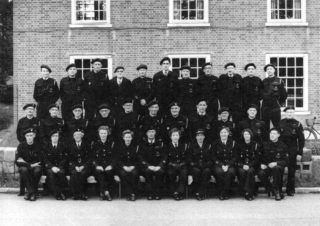 Shirley was born in Valley Road WGC in 1934. Her memories were recorded by the Welwyn Garden Heritage Trust as part of its Where Do You Think You Live? project.

“Some of my earliest memories are running up and down the garden as a child but when I was 5 years old I went to Parkway School. While I was at Parkway School amongst other things the War had started and I remember walking to school, no cars in those days for us, with my gas mask slung over my shoulder and also having some lessons in an air-raid shelter. I remember walking to school one day when I saw what I now know was a ‘flying bomb’ flying over the Golf Course.

I enjoyed my time at Parkway School and we had a very very strict headmistress who we all respected, almost saluted when she came past. She had a little grey Austin 7 and she lived at the very start of Valley Road and to this day I remember the registration mark which was FPC17 so between as young as we were we decided that meant ‘first prize cat’ because she was so difficult and strict with us. I stayed at Parkway School and took what was known in those days as the 11+ exam and I secured a place at what was then called WGC Grammar School which is now Stanborough School.”

Shirley’s father was the chief air-raid warden for WGC and you can hear her memories of air raids in WGC on the first audio clip.

He came to WGC “because he was given a job at Murphy Radio which was obviously one of the first firms in WGC. He actually ended up as a civil servant working for the Ministry of Supply and he used to go to London every day by train and I can remember getting to the stage when I looked at him going off to work with his long warden’s coat on and his rubber boots and at that stage thinking “Oh daddy you shouldn’t go to London looking like that” but it was obviously at a time when people did that sort of thing.

My father used to play golf and I used to go with him to play golf and I used to walk the golf course with him. When we got to what is now the Waggoners Pub which at that time was actually on the golf course, we have now got a road running between the Waggoners and the golf course, he used to sit me outside with a bag of crisps which had inside it a little blue piece of paper with some salt in and a glass of lemonade and he went in and had a beer with his other golfing mates.”

In the second audio clip Shirley relates her memories of playing sports at the Grammar School.