You are here: Home>People>Carl Dane: Former Circus Strong Man Has a Grievance 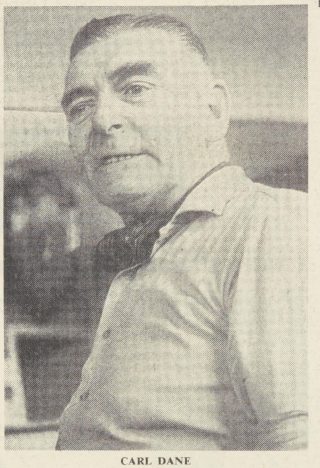 A former circus strong man, who, at the age of 76, can still punch a six-inch nail through a three-inch plank with his fist, has a grievance against Welwyn Garden City Urban Council. Reported by the Hertfordshire Mercury 4 September 1964.

Mr Carl Dane, who is public relations officer for 41 ciruses in Britain, has come to Welwyn Garden City to find out why the Urban Council will not allow him to hold a two-day circus on the King George V playing field.

Since 1957, Mr Dane has been applying for permission to hold the two-day circus and has been turned down every time.

However, the Development Corporation at Welwyn Garden City have provided him with assistance and allowed him to use land near the Gosling Stadium.

Mr L Slocomb, clerk of Welwyn Garden City Urban Council said ‘This is news to me. I have no recollection of these applications, and in any case they wouldn’t be allowed to use King George V playing field.

We have spent thousand upon thousands of pounds on drainage for that field. It is used for numerous sports, and pitches are marked out. It is in the centre of a heavily populated area, and there is only one vehicular access, that in Beehive Lane. There are also legal restrictions as to the number of days a playing field may be shut during a year.’

Carl Dane did not apply in 1964 , but he did bring Sir Robert Fossett’s circus to Welwyn Garden City.

The arrival of the circus at Welwyn Garden City will be worth £1,600 in contracts to local shopkeepers they will be catering for over 200 personnel, and 200 animals, including seven elephants.

Although Carl Dane is not from Welwyn Garden City or Hertfordshire for that matter he is an interesting character.

‘Carl Dane must have been one of the most known unknown movie stars ever. He was seen on the big screen by millions but most of them would not even have known his name.

For this 6ft 5in strongman’s claim to fame was that he was the first man to strike the gong at the start of many Rank Organization films.

Carl always took a secret delight in his anonymity and loved to regale people with tales of his life in Hollywood.

He received £12 for the job in 1932 for which he had to take off his clothes and cover himself in bronze make-up to strike the huge gong.

Back then the company was known as General Films Distribution and the man striking the gong became a trademark, like the roaring lion used by Metro Goldwyn Mayer.

But filming the sequence wasn’t as easy as you might imagine . . . in fact, it took several weeks.

“And many times I would be standing there under the lights when the take would stop dead because perspiration was making streaks on the make-up.

“The scene had to be perfect, so we had to start all over again with another four or five hours of making up.”

Carl, by the age of 10 he had developed some physique and was being billed as the “Boy Hercules”.

He became stronger and stronger and was soon entertaining the crowds outside theatres, circuses and cinemas with his strongman act.

In 1926, he became the first man to pull a London double decker bus with his teeth. Some 12 passengers were on board at the time.

Among his other tricks were squeezing every ounce of juice out of an apple with one hand, lifting a horse, carrying a piano and punching nails bare-fisted through a plank.

He continued to give exhibitions of his strength in later years.

But when he turned his attention to acting in the 1930s, Carl found that jobs were scarce and was delighted when he was offered a few days work with Rank.

“All I knew was this week we would have something to eat,” he said.

Photographic techniques necessitated that the sequence should be shot every three years and Carl filled the role until 1948, when boxer “Bombardier” Billy Wells replaced him.

“I never thought it would last so long,” he said. “It seemed like a flash in the pan publicity exercise.”

During his career as a small-part actor in films such as A Connecticut Yankee In King Arthur’s Court, Carl played alongside Bing Crosby, Sir Cedric Hardwick and William Bendix.

In Hollywood, he met and became a friend of stars such as Mary Pickford, Gloria Swanson, Joan Crawford and Stan Laurel and Oliver Hardy.

He also toured the world with theatre companies, appearing on the stage from New York to Munich.

His last acting role on the big screen was as the coachman in The Go-Between, which starred Julie Christie.

Carl eventually came back to England and settled in Northamptonshire, working for a time as the publicity officer for Fossett’s Circus.

In 1959, he was awarded the OBE for his services to show business. He also began to compile a book, The Man In Front, but it was never published.

Carl spent the last 20 years of his life living in a bungalow in Crick, but kept in touch with the film world, being visited by producers, actors and personalities.

Although he was officially retired, he still made around 300 television appearances, on one occasion as a relief newscaster, and occasionally accepted jobs as a toastmaster or compere.

He also developed an interest in training racing donkeys and hiring them out for donkey derbies and shows.

Carl kept scrapbooks filled with newspaper cuttings and pictures of himself with such notables as the Queen and Winston Churchill.

But he seemed to have little nostalgia for his days with Rank.

In fact, when the company announced it was giving up films after half a century in 1980, Carl said: “A lot of people have Rank to thank for their careers, but films are just a business and the gong trade mark was just another job for me.”

He said: “It is an extraordinary thing . . . that one episode has haunted me all my life. But I just did it for the money.”

Carl had to have his leg amputated in 1980, but was still able to get around.

He died at the age of 91 and is buried in St Margaret’s churchyard in Crick.