You are here: Home>People>Our Town - Under Twenty Parade

Our Town - Under Twenty Parade 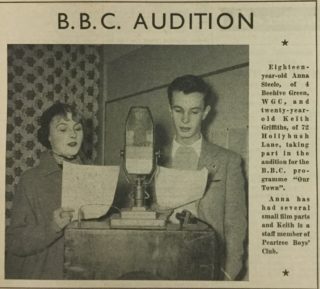 Two teenagers during an audition for the recording.
Welwyn Times 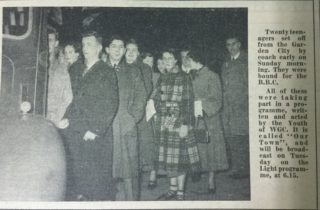 Boarding the bus to go to the recording session.
Welwyn Times

At 6.15 on the evening of 23rd February 1954, hundreds of Welwyn Garden City residents excitedly tuned in their radio sets to the BBC Light Programme to hear local teenagers from the town talk about the town in which they live.

The Garden City’s younger generation were on the air for half an hour in an Under Twenty programme which let the people of Britain know about the town’s past, present and future. They turned the spotlight on local development, clubs, schools, drama and other activities.

Among the comments at the time were those from Miss Flora Robson who herself spent her younger days living in the town. Her advice to the town’s young people was “ If you cannot get into a Society, start one of your own. Come on and show us who comes next.” Mr R G Gosling, Chairman of the Development Council spoke of trying to create a balanced community. When asked why there was no hospital, he replied that it was hoped to start work on one by the end of that year.

One of the script writers for the programme was the late Mr Mervyn Lloyd who in later live acted in and directed many plays at the Barn Theatre. He and fellow script writer Anna Steele, from the committee created to write the programme, came up with a concept of a flying saucer landing on the Campus and then showing the visitors from outer space around the town.

Some twenty teenagers went to the BBC for the recording session the previous Sunday, the programme including pre-recordings of Howards School Choir.

The audio recording is by a Reynold W. who was one of the teenagers taking part in the broadcast and is his recollection of the story of his involvement.

General verdict from the residents “ A good show, we enjoyed it.”